Several of the South Bay cities already have bike infrastructure and bike master plans in place.

The purpose of the South Bay Bike Master Plan will be to expand upon and provide a connection between these existing bikeways.

Additionally, the map below shows many of the existing bikeways throughout the County (Los Angeles Metropolitan Transportation Authority, 2010). 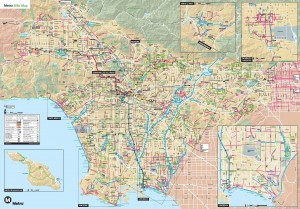